The ability to shower in private and comfort is one of the biggest perks of the RV life versus traditional tent camping. RVers don’t have to line up at communal campsite showers or track down a truck stop to get clean.

However, as when you are boondocking you rely on your fresh water tanks to meet all your water needs, wasting water is not something anyone wants to do. Therefore, a leaking RV shower head can be more than just an annoyance, it could leave you high and dry (literally). In this article we take a look at how you go about fixing a leaky shower head.

Why Do RV Showerheads Leak?

This sounds crazy, and the fact is that RV shower heads like this do almost drive lots of RV campers that way. Yet the issue exists in even some of the most popular RV shower heads on the market.

Most modern RV shower heads have a built in shut-off valve. This makes a lot of sense.

As any experienced RV camper will tell you the best way to shower to conserve water is to wet your body, stop the water, lather up, start the water again to rise off.  This would be awkward if you had to keep reaching to turn the faucet on and off, so the side mounted stop valve makes it a lot easier.

The manufacturers of these types of RV shower head do offering reasoning for wasting all this water – not to mention putting a constant small drain on your RV batteries.

According to them the shower head should continue to drip a little water to prevent the unsuspecting occupant of the shower stall from being hit with a blast of freezing – or boiling hot – water when they turn the shower on.

This means that a leaking RV shower head may be in perfect condition, it’s simply designed to do that. As the unit ages though this leak may become a real leak that needs attention. And if you dislike wasting any water at all – which lots of eco-friendly boondockers do – or putting any unnecessary strain on your battery then you may want to stem the flow of water altogether. It’s doing that we will discuss next. 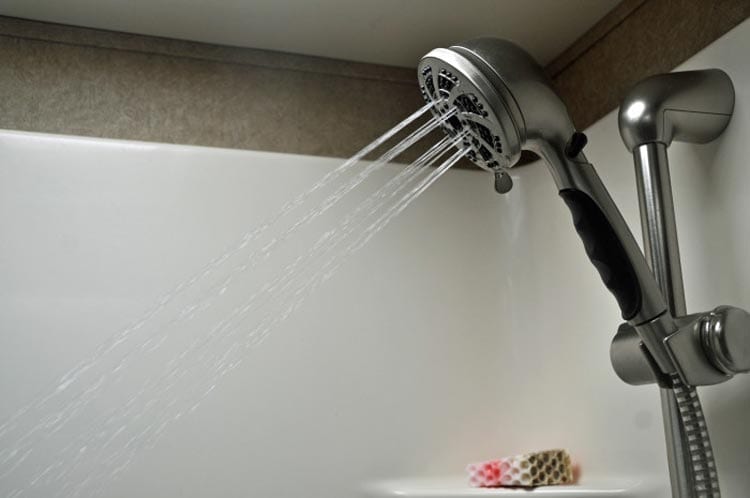 The most obvious way to stop wasting water thanks to a leaking RV shower head is to replace it with a model that does not feature the drip mechanism we just described. That may be easier said than done however, as even the top selling models often feature them.

The shut-off valve and the drip feature are often touted as safety measures – no one wants to end up scalded after a shower, and it’s a real concern if you travel with kids – although more cynical veteran RVers often say that isn’t the case, as ‘cold blast’ often occurs, anyway and that unwelcome occurrence is a problem in itself.

So, you have an RV shower head with a shut-off valve that is dripping more than you’d like – and occasionally blasting you with icy water that is more of a shock that you’d like first thing in the morning. How do you fix the problem without having to replace a shower head that you otherwise like and still functions well?

One answer is to install a shut off valve, along with a check valve, onto the faucet that feeds the shower itself.

These are easily found online and cost just a few dollars each. In some cases you may also need to order a simple gasket to fit everything together, but they too are easy to find and inexpensive.

This video explains how to make use of these little parts to create an RV shower head that does not leak:

In the video, you’ll notice that the presenter also adds an extra washer to the faucet before installing the shut-off valve. This may be required to keep everything snug, but this varies from faucet to faucet, so even if you don’t end up needing to use it’s a good idea to have one handy anyway, just in case you do.

If you try the fix in the video above, and you still have a leak, then there’s a good chance that you will need to bite the bullet and replace your showerhead altogether.

But before you do, check the washer on the shower head itself, that may be broken and the cause of the leak. If so that’s an easy fix that will only cost you a few dollars, cheaper and easier than replacing the shower head as a whole for sure!

Is Something Else Wrong With Your RV Shower?

A leaky showerhead is not the only thing that can go wrong in your RV shower. Here’s a look at some of the more common problems:

If you consider yourself handy you can make many of the fixes we have described yourself. If the issue is more complicated – a cracked drain pan for example – heading back to your RV dealer for a professional inspection is probably a better idea. The plumbing in an RV is more complicated than many people imagine, and some things are just best left to the pros.

© 2020. All rights reserved. RV Whisperer.com. RV Whisperer is a participant in the Amazon Services LLC Associates Program. Amazon and the Amazon logo are trademarks of Amazon.com, Inc. or its affiliates.  As an Amazon Associate, we earn from qualifying purchases.